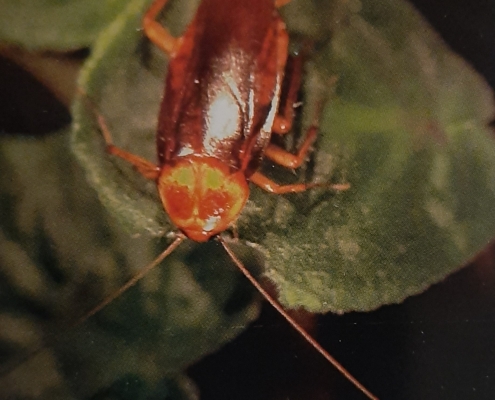 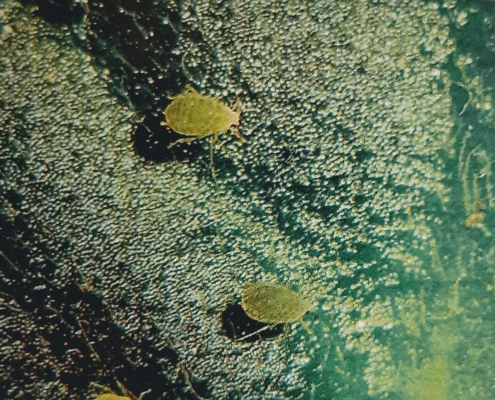 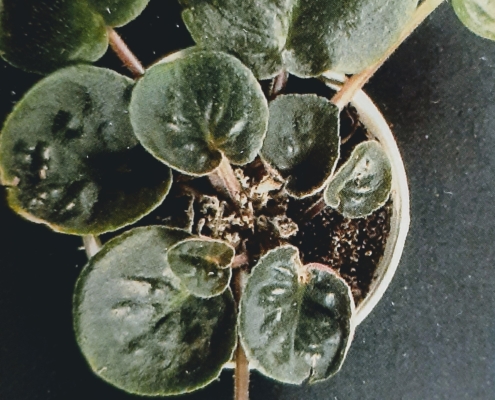 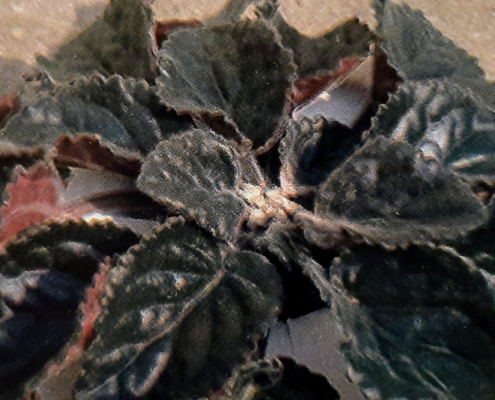 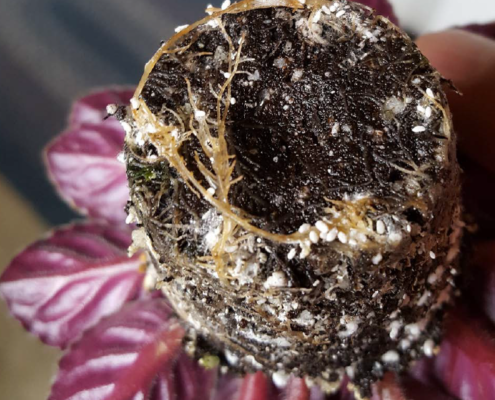 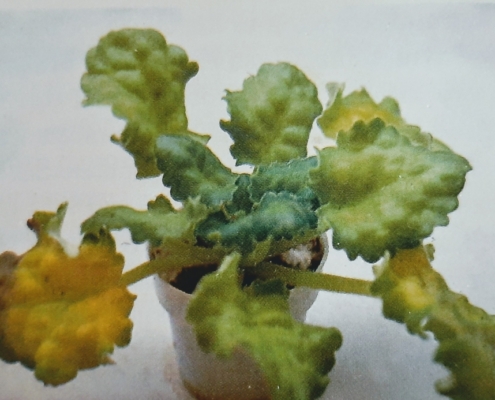 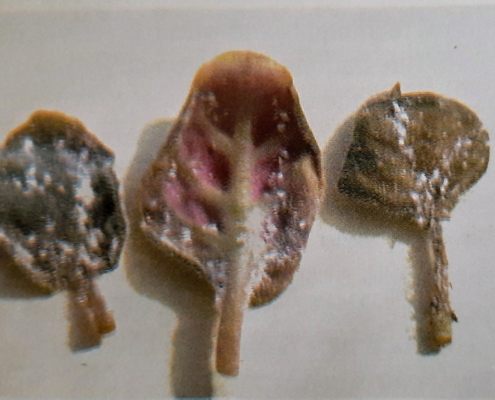 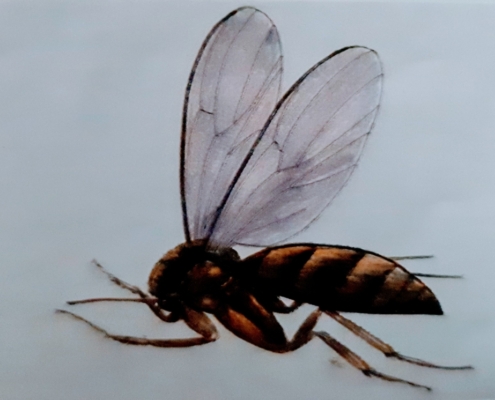 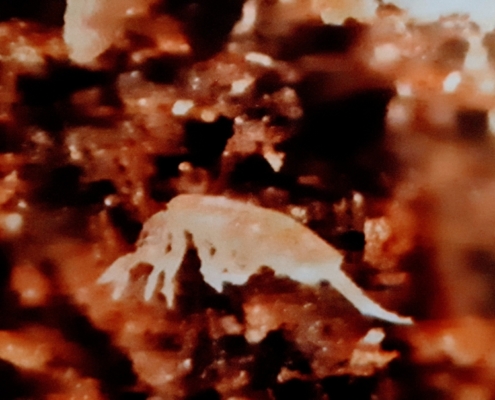 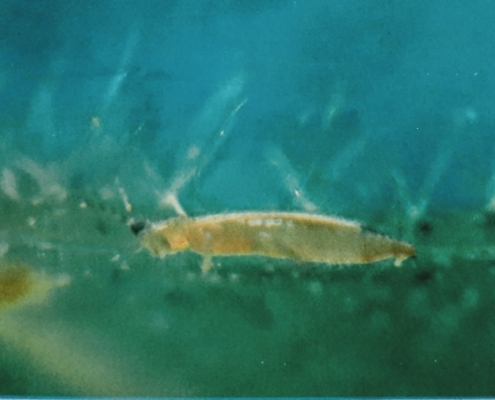 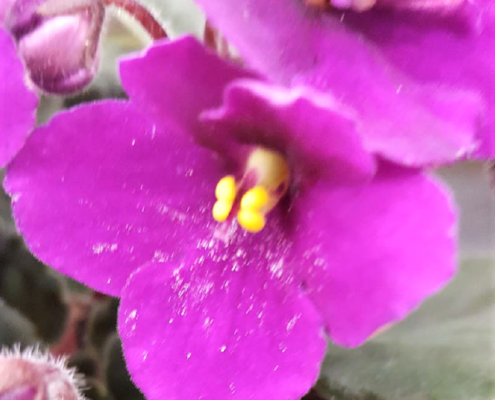 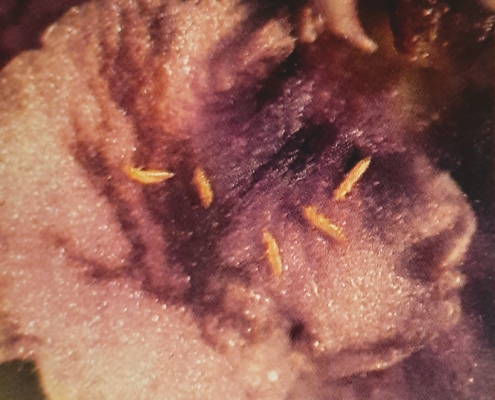 The following descriptions are part of the information found in the book Insects and Mite Pests of African Violets written by Dr. Charles Cole and copyrighted by AVSA. The complete book can be purchased from the AVSA website Store or ordered from the office. The book will go into further detail about the pest and discuss treatment options.

The descriptions are intended to help with diagnosis. Once a pest is correctly identified, it will be easier to choose chemicals or cultural practices might be recommended for control of the pest in specific locations.

SUCKING PESTS
Sucking pests have elongate mouthparts which act much like a hypodermic needle. Their mouthparts pierce the tissue, and the pests suck up plant juices.

About 29 species of soil mealybugs are found in the U.S. At least 2 and perhaps 4 or more will feed on African violets. The species in this group are very difficult to distinguish one from another. Two species positively identified from African violets are the root mealybug (Rhizoecus americanue) and the Pritchard mealybug (R. pritchard.) Although the most commonly occurring species appears to be the Pritchard mealybug only an extensive survey can determine this.

Foliar mealybugs are common pests of native trees, weeds and grasses. They readily attack many ornamental trees and shrubs as well as plants cultured for their flowers or foliage. These pests occur outdoors during warm weather and in the home and greenhouse throughout the year. More than 280 species of mealybugs have been identified in the United States and Canada. Of these, several species may attack and seriously damage cultured plants.

Some of the most annoying sucking pests of African Violets are the thrips. Several species will feed on and reproduce on violets. Because of their small size, they can be very difficult to find on a plant and may go undetected for a long period of time. Pollen spill is often an indication of the presence of thrips. Control of some species can be difficult.

Aphids, commonly called plant lice, are among the most common and most numerous of all creatures on earth. Worldwide, there are about 2,000 different species. More than 1,350 species are found in the U.S. and Canada. About 80 species of aphids are considered as pests of food crops and ornamental plants. Nearly all plant species have one or more species of aphids that will attack them. More than one-half dozen species have been recorded from African violets. As a general rule, aphids do not like to feed on violets, but when forced to do so, due to the lack of a more suitable host, they can cause serious damage.

About 200 species of whiteflies have been described. Most of the species are tropical or subtropical. Only about 10 species are found on ornamental plants in the U.S. At least 3 species will readily attack African violets. Whiteflies can be quite annoying. They often occur in tremendous numbers and when heavily infested plants are shaken, the air is filled instantly with a white cloud of these tiny pests.

Scale insects are close relatives of mealybugs. More than 2,000 species have been collected from landscape, interior-scape and greenhouse ornamentals. About 20 are considered serious pests. Of these, 2 species are commonly found on African violets. These are the fern scale (Pinnaspis aspidistrae) and the brown soft scale (Coccus hesperidum.)

CHEWING PESTS
Chewing pests have teeth-like mandibles. They damage plants by consuming the plant stems and leaves or even the buds and flowers. Their damage is quite evident as holes in the leaves or ragged edges on leaves. Often flower buds may seem to disappear as they are totally consumed. Wounds often provide a place of entry for pathogens, resulting in secondary diseases invading the plant.

The American cockroach is the most commonly reported chewing pest of African violets in the United States. It is a pest in the greenhouse, the floral shop and the home. Just a few cockroaches on a floral cart or greenhouse bench can cause an unbelievable amount of damage.

The larval or immature stage of several moths will damage violets. These larvae do not prefer violets as a host plant and feed on violets only when no other source of food is available. Many of these larvae can not complete their development on violets.

Several small beetles have been found feeding on African violets. Usually they are trapped in the home or greenhouse. Beetles are quite active and move freely from plant to plant. Some feed on pollen but most feed only on the foliage.

MITES FOUND ON AFRICAN VIOLETS
More than 25 different species of mites have been recorded from African violets. Fortunately, most of these are not injurious to the plant. Mites collected from violets fall into four distinct groups. These are scavengers, fungus feeders, predacious mites and plant feeders.

The cyclamen mite is devastating to African violets. Its ability to increase numbers rapidly, its detrimental effects upon the plant, and the difficulty in controlling this mite make it the most feared of all violet pests. It is about 1/100th of an inch long when full grown. It is almost impossible to detect without the aid of magnification. Damage occurs when mites insert their sucking-type mouth parts into tissue and remove sap but also inject a toxic chemical into the plant which disrupts growth.

Broad mites are colorless when young but mature into amber to dark green. They are found almost exclusively on the underside of the leaves. As it feeds, it injects toxic chemicals into the plant, causing the leaf to become brittle and to roll under or curl at the edges. As damaged worsens, leaves may crack. Flowers may be distorted or discolored.

Privet mites is sometimes called “false spider mite.” They are very small, flat, oval, and dark red. It is found on the underside of leaves, particularly along leaf veins. Damage may appear as small brown flecks on the foliage, or the underside of the leaf may appear bronze while the upper surface shows a reddish discoloration.

NUISANCE PESTS
Many of the insects found in association with African violets cause little or no harm to the plants themselves but often create a nuisance for plant growers. The very presence of any insect is enough to arouse disgust and displeasure from many people. Some people feel that the only good insect is a dead insect.

CHECKING FOR PESTS
Frequent examination is necessary in an effort to detect pests which have infested your plants. Weekly examinations are usually frequent enough to detect pests before populations increase to damaging levels. In greenhouse operations this may take a considerable effort. In a home where fewer plants are involved, plants are generally observed much more frequently as they are given the TLC of normal grooming.

SELECTING A PESTICIDE
Selecting an effective pesticide is fast becoming a science. An ever-increasing number of factors must be considered before purchasing and using a pesticide. African violet enthusiasts must know a great deal about pesticides if they are to achieve effective control of the various violet pests and
maintain the aesthetic value of their plants. We may define a pesticide as any substance or mixture of substances intended to prevent, destroy, repel or mitigate a pest. Included with the pesticides are substances or mixture of substances intended for use as a plant growth regulator, defoliant or desiccant.

PEST PREVENTION
The African violet grower can often prevent or greatly reduce pest problems by adopting certain practices. One of the most important factors in maintaining a pest-free culture is to take care and introduce only pest-free plants into your culture. To achieve this a grower must be knowledgeable
in the detection of pests and pest damage.

Many violet pests are extremely difficult to detect when in low numbers. For this reason, newly acquired plants may be isolated for a period of 60-90 days. While in isolation, frequent and thorough inspections should be made in an effort to determine if the plants are clean or infested with pests. Healthy plants are much less susceptible to pests than unhealthy plants.

Any practice which would reduce plant stress and promote good vigorous growth will enhance pest control. One such factor is to maintain a clean greenhouse and growing area free of debris and old plant material. Other practices which will enhance plant growth and reduce pest problem include maintaining proper temperature and keeping the growing media at the correct pH level.

The African violet is truly an amazing plant. Seldom has there ever been a plant that has responded so well to being cultured. With a little knowledge and a little effort, we can maintain the beauty and perfection of this jewel for our own pleasure and to share with those we care about.