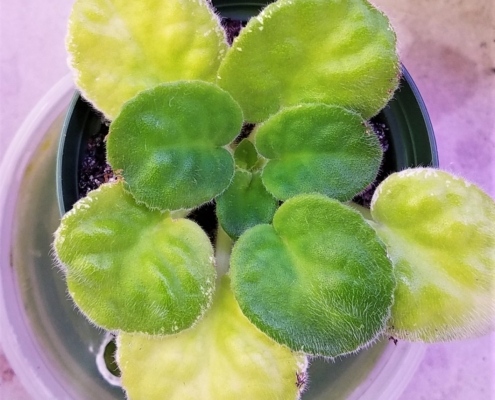 Many factors relate to nutrient deficiencies. It is more than just a lack of fertilizer. Temperature affects how a nutrient is absorbed or how it functions. Light changes may deplete nutrients rapidly (e.g. bleaching). Water availability is critical to plant functions and nutrient uptake. Soil pH controls how nutrient is absorbed. Good cultural practices will maximize your violet’s use of nutrients. Poor practices may result in deficiencies.

Even in the worst cultural conditions, African violets are efficient at storing and transferring scarce nutrients to maintain life in the center of the crown. As a result, the symptoms of deficiency develop over time. Deficiencies are rarely instantly apparent.

SYMPTOMS RELATED TO A DEFICIENCY OF SPECIFIC NUTRIENTS

Effect localized on older leaves, occurring as mottling or chlorosis, with or without necrotic spots, but with little drying of older leaves.

Effect localized on newer leaves of the plant

Terminal bud (center growth) dies preceded by unusual distortions at the tips or bases of the young leaves making up the terminal bud.